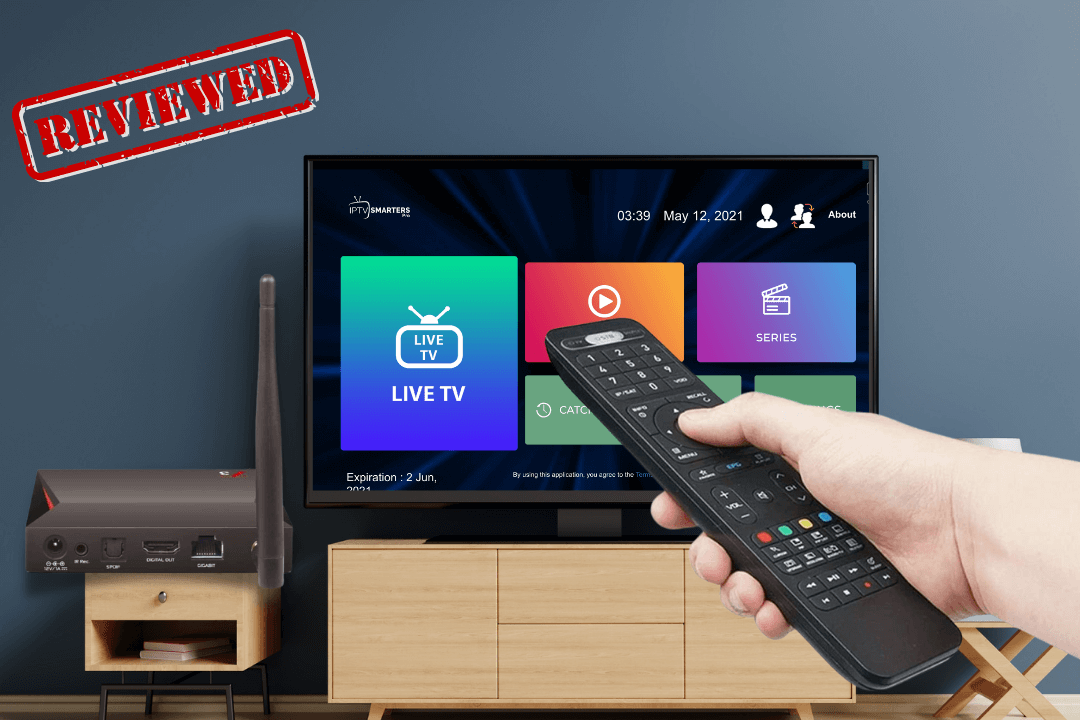 It has already been a few months since I cut the cord on my cable TV and have bought myself an IPTV subscription. I am a clean freak when it comes to my media and gaming setups, and I usually like to hide most of the dangling wires and cables. Getting an Android box lets me get rid of the longest cable, and I can’t thank God enough for this technology to exist.

However, getting an IPTV subscription also meant that I had to add a few extra things to my setup. One of those things is a device that will let me connect to my IPTV providers, which as of now, most TVs do not have the functionality natively. While looking for such devices, I came across the Dreamlink T3 5G IPTV Box.

It has been three months since I bought Dreamlink T3 5G, and I would like to present my findings and share my experience with them. So, buckle up because I have a lot to say about this, and if you are looking for an IPTV box, you should not miss this.

What is the Dreamlink T3 5G?

Before I dive deep into the nitty-gritty about the Dreamlink T3, we need to know what this device is. The Dreamlink T3 is an Android box that is supposed to make your “dumb” TV a “Smart” one.

Many brands worldwide are selling cheaper TVs that do not have the functionality, unlike their higher-priced siblings, to connect to the internet, which birthed the market for such Android boxes.

These Android boxes let the user connect to the internet using their TV and watch Netflix, and Youtube, and even connect to their IPTV provider for a traditional TV experience.

So, what is so special about this Android Box, I hear you ask? Well, The Dreamlink T3 is not your traditional Android Box with just the basic functionality of connecting to the internet. It was designed especially keeping people like myself in mind who have cut the cord on cable and are looking for a seamless IPTV experience.

With IPTV being a comparatively new technology at this stage and the levels of adoption being still deficient among consumers, companies generally have not invested much into research and development for them. The Dreamlink T3 is an upgrade to one of the most highly rated Dreamlink T2, which should, in theory, make it the best IPTV box available on the market. 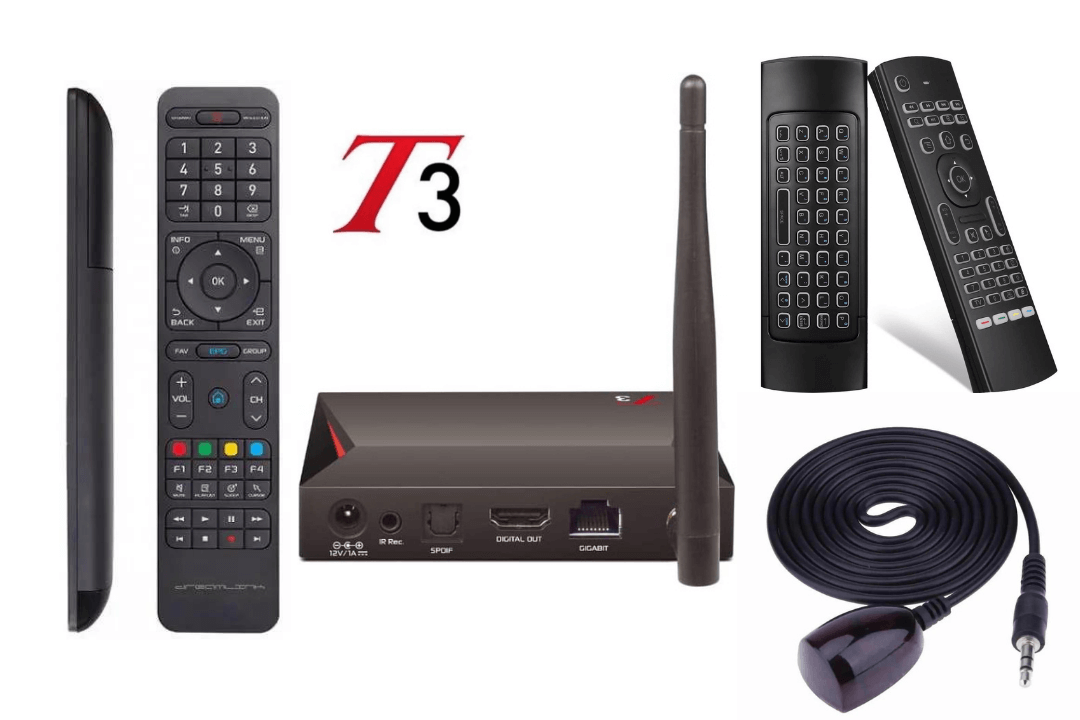 The Dreamlink T3 comes in a red and white Dreamlink branded box. Once I cut the sealing tape and opened the box, I was greeted by a User Manual. The User manual had instructions on setting up the box; however, I threw mine away as soon as I took it out. You might want to hold on to it if you are not particularly tech-savvy.

With that out of the way, we find the device sitting on layered cardboard. Taking out the IPTV box, I must say that it is a good-looking device. With its black and red color scheme and stylized dream link branding, it can easily blend in with any media setup.

The Dreamlink T3 has a USB port on both sides, with one being a USB 3.0 while the other being USB 2.0. Both of them should have been USB 3.0, but so far, this is my first gripe. On the back, I saw the usual stuff with an HDMI port, Gigabit Port, a 3.5mm audio jack, along with a power adapter port.

Once I was done admiring the look and the design of the media box, I took out the cardboard and moved on to the accessories. First, we find an external wireless adapter that we will use for connecting to the WiFi.

Next, We have two remotes. One of them is an Air Mouse Keyboard Remote used for typing, while the other is the Extra Luminous Remote which we will be using for normal media playback.

We also have another cable which was a surprise for me as it was a USB to MicroUSB, Type-C, and Lightning Cable. This wire is probably to charge your phone using USB ports.

The last thing we find in the box is a power adapter that will power the Dreamlink T3.

Let us go into the features on offer for the Dreamlink T3 IPTV Box with unboxing out of the way.

Now on to the technical specifications, but first things first; The Dreamlink T3 is not a powerful machine in any way. I believe that it will struggle on any of the newer games that are on the play store.

So do not buy this device if you are someone that is looking to game on it. However, as an IPTV and media box, this has enough processing power to last for years,

For the processor, Dreamlink is using a Quadcore 64-Bit chip which is paired with a GPU. I suspect that they are probably using a mid-range MediaTek mobile chip; however, that is just speculation on my part.

On to the storage, we have 2 GB of DDR4 Ram; however, it does not specify the speeds it is running. We also have 16 GBs of internal storage on the device, which is being used to house the operating system.

You can use the remaining to store whatever media you want to keep; however, if you are using the PVR functionality, you should connect an external storage device to it.

The maximum supported resolution on this device is 4K (3840 x 2160) at 60 frames per second. I have tested by playing 4K movies, and I am happy to report that thanks to whatever GPU this machine is running, I could not see any frame drops during my playback.

The Dreamlink T3 has a lot to offer in its feature set, thanks to its hardware. This device being an IPTV box means that it has a box to connect to any IPTV provider. Now, the ability to play an IPTV stream is one thing, and recording the stream is another that many IPTV players struggle with.

I am happy to report that the Dreamlink T3 has advanced USB PVR support which means all you need to do is connect a storage medium to the USB port, and you are good to go to record anything you want.

The T3 also lets you start and stop recording as you go so that you will skip those commercial breaks, which could fill up your storage with extra fluff you do not want to watch.

The Operating system on this device is Android 7 Nougat which it is stuck on. Dreamlink has promised there will be updates; however, I am not certain about it.

However, I found it updating once with a critical security update which is a good thing. The operating system is not on the cutting edge; however, it still gets the job done.

One final feature that I was thankful for was the ability to connect to Bluetooth. You have no idea how helpful this was to combat my “Cablephobia,” as I could very easily connect to my Bluetooth speakers. I sometimes even use my Airpods while watching a movie on the big screen, thanks to this functionality. So Kudos to Dreamlink on this one. 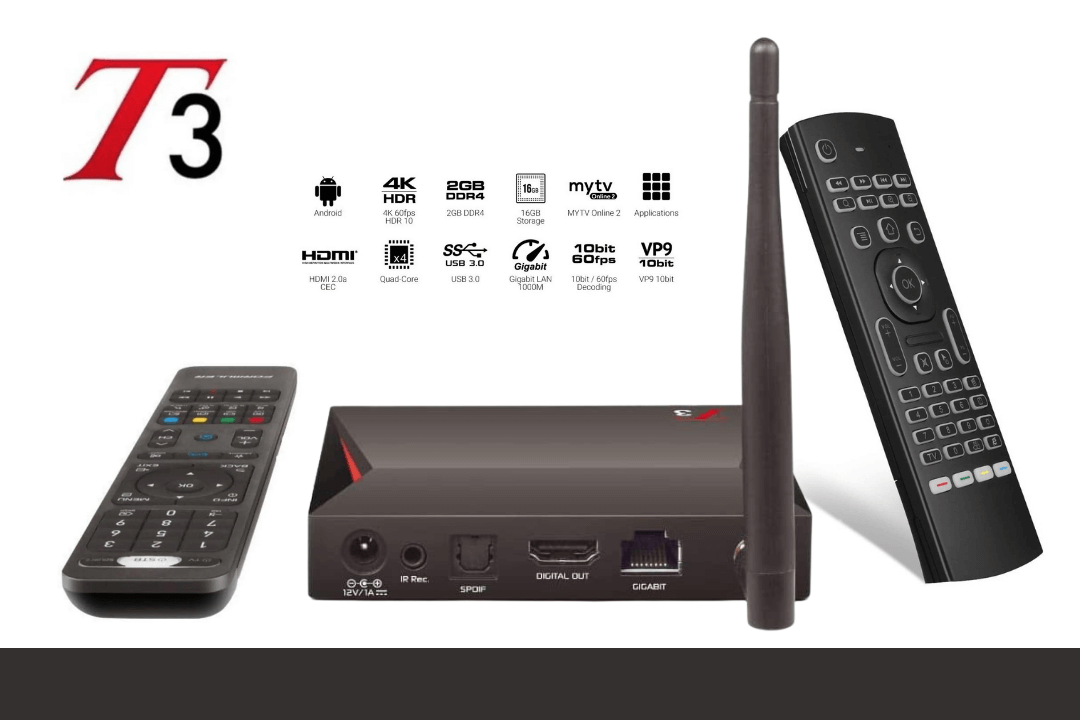 The Interface of the Dreamlink T3 is memorable to any other Android Box and Smart Tv that you may find on the market. Once you start the device, you are first greeted with a dream link logo, and it takes you through a small setup screen.

Once you get that out of the way, you are greeted with a screen that you can control using the remote with some apps and quick settings. Underneath, you have Settings, Bluetooth, and the off button.

The myTV app allows you to connect to and start watching an IPTV screen. The app itself is also very intuitive, You can see what you have recorded previously, and you can also schedule future recordings.

The Audio Optimizer is a sort of audio equalizer that you can use to create the best audio settings. Miracast allows you to stream your mobile phone on the TV. Vlc Player lets you play your stored media on the TV.

In the quick settings menu, you can also map specific apps to the colored keys on your remote so that you can start an app with the push of a single button.

The Dreamlink T3 IPTV box is surprisingly affordable compared to the features it has on offer. Some IPTV boxes do offer some additional features; however, they do not justify their prices.

So, if you want something that will let you watch your IPTV stream at an affordable price with many additional features like USB PVR and 4K support, then the Dreamlink T3 defines bang for the buck.

Its low price, along with its features, has made it one of the most highly rated IPTV boxes on the market.

Well, I guess this is all I had to say about the Dreamlink T3 IPTV Box for now. I was new to IPTV subscriptions and devices, so at first, I was a bit worried about whether I had wasted money betting on a Technology that is still more recent compared to the traditional and reliable cable network. However, once I started using the Dreamlink T3, I could not have been more wrong.

Now do not think that this is the best be-all and end-all of IPTV boxes. You might find many other devices that may have more features; however, the price Dreamlink is selling is a steal. I watch Netflix at 4K, and I have never seen a single frame drop in all of my sessions.

So, If you are new to IPTVs, then the Dreamlink T3 5G Device should be the first choice for your IPTV Box.

Have you purchased your first Internet Protocol Television and now you are wondering how to use IPTV on VLC using the M3U link? Well! in that case, your search is finally over because in this article...

Are you guys fed up with watching sports programs after paying a big amount of money and in turn getting poor quality and customer support? Are you looking for the Best IPTV that could cover all of...

Hi! My name is Mason and welcome to IPTVSeek! Back in 2018, I bought my first IPTV Service and I've been using Streaming Sticks, TV boxes and Android TV's ever since. In this site, I'm sharing all the tips and tricks I've learned over the years, so you don't want to miss it.